Committee Suggests Changes to Make Sure Faculty Voices are Heard 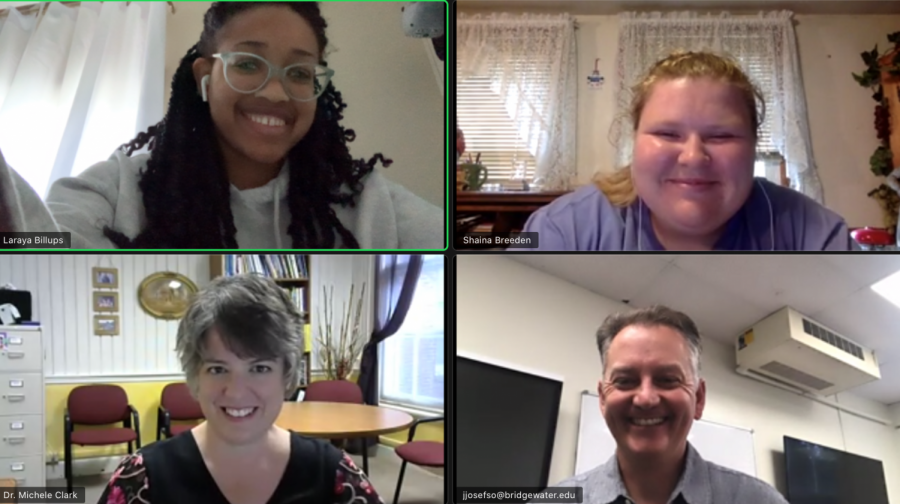 Seniors Laraya Billups and Shaina Breeden talk to Dr. Michele Clark and Dr. James Josefson. As members of the FEC, they explain the importance of faculty governance on campus and how it relates to the SRA process.

Bridgewater, Va. – Bridgewater College faculty will review and vote on the strategic resource allocation recommendations made by the administration before the board of trustees votes in November. This is happening because of a resolution presented by the faculty executive committee and passed by the faculty in September.
What is the FEC?
The FEC is a governing body that is composed of faculty members. It was instituted at Bridgewater College in 2015 to create a system of faculty governance.

Historically, higher education was run more autocratically by a board of trustees and the president of the college who would make the decisions.

The representatives from each division have three-year terms that are staggered so that not all the positions are changed in the same academic year.
What the FEC Does
The faculty as a whole decides upon the curriculum, majors, courses, etc. “We make all of those rules that make education work,” said Josefson.

The FEC, as a subset of faculty members, streamlines decision making and manages “a lot of the daily work that the faculty does not want to worry about, like routine business that is not controversial,” said Josefson.

Any decisions that the FEC passes is put on what is referred to as a consent agenda. This basically states what the FEC is passing and that they think the faculty will agree with them.

At any point, a faculty member can argue that something the FEC is passing is controversial — which will put the item back on the table to be discussed by the whole faculty.

“It only takes one faculty member to withdraw consent from the consent agenda, then we have to decide on it as a faculty,” said Josefson.

The FEC also serves as a communication channel between the administration and the faculty.
FEC’s Role in SRA Process
The FEC decided to intervene in the SRA process to represent the voices of the faculty members. While faculty members have been involved in the process since the beginning, the “participation didn’t amount to representation,” said Clark.

At the end of last spring, faculty and staff completed templates to describe their programs. These templates were then submitted to one of two task forces: one for academic programs and one for support programs.

Faculty nominated individuals to serve on the task forces and had “the choice to self-nominate,” said Clark. The administration made the decision to appoint the members of the task forces.

Because they could not ask questions, which was how the process was set up, some faculty members felt like they were not fairly represented. This prompted the FEC to suggest a change.

“The faculty as a whole felt that it would be more appropriate that rather than the recommendations going directly to the board [of trustees] without the faculty seeing them, we wanted to ask the administration to let us see those [recommendations] and let us take action as a faculty body,” said Clark.

The FEC drafted a resolution to ask the administration to share the details of the recommendations so the entire faculty could vote on those issues that directly relate to the curriculum, such as majors and courses.

Another resolution asked the administration to provide information on how faculty members laid off would be notified and if they would receive severance.
The Impact of COVID-19
Committees like the FEC are not unique to Bridgewater College. There are examples of faculty governance at many other institutions, but the voices of faculty members have been neglected due to the COVID-19 pandemic.

According to Clark, there is a national debate to determine whether colleges should be seen as corporations to generate revenue or as institutions meant to educate.

“Standards of faculty governance across the country have been challenged or abandoned by the COVID-19 crisis,” said Clark.

Because higher education is under the strain of COVID-19, crucial decisions have been made mainly by the administration in an effort to sustain the institution.

“This is a less democratic moment in which administrations are taking the lead in order to deal with the crisis,” said Josefson.