‘Engage in the Process’ For Your Voice to be Heard 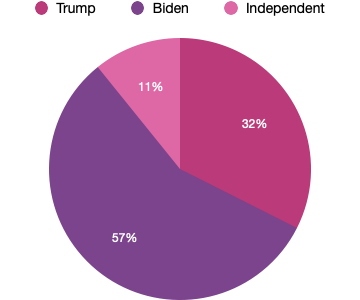 Bridgewater College students are encouraged to vote in the upcoming presidential election. Data conducted on an Instagram poll completed by BC students and staff on Oct.19, represents those who plan to vote for Trump, Biden or an independent politician.

Bridgewater, Va. – As the country prepares for election day on Nov. 3, Americans have the option to vote in one of three ways: early in-person, mail-in voting or voting at the polls on election day.

Student Life, a FILA-150 class on voting registration, and Virginia21 have been tabling on-campus and encouraging students to register to vote.

“Students should vote because they’re the next generation, you get to have your voice heard, and it’s is your civic duty to do so,” said Coordinator of Student Engagement and Leadership Samantha Schlernitzauer.

Professor Benjamin Erickson teaches political campaign communications at BC and has experience working for various campaigns in Maine, where he lived before coming to Bridgewater.

“Voting is important because we have to be involved,” said Erickson. “If you’re not involved in the process, the process will continue to be something you don’t like. I think that the apathy people have for participating, the negativity that people feel towards politics, you can’t change that unless you vote, unless you participate, unless you engage in the process.”

Through assignments and discussions, Erickson wants to show his students that voting is essential to promote lasting change.

“Even though it’s really difficult for some people to feel like their vote matters, it absolutely does. If you don’t vote, there’s no way things will change in the process,” said Erickson.

On Oct. 19, an informal poll was conducted on Instagram to gage how students were viewing the election this year. Students and staff were to answer two questions on the Instagram Stories feature.

Schlernitzauer said that Bridgewater College does what they can to encourage students to vote, no matter the candidate, “but it’s on the person” to take the initiative to actually register and vote.

If you would like information on how to vote this election, visit https://www.elections.virginia.gov/casting-a-ballot/absentee-voting/.