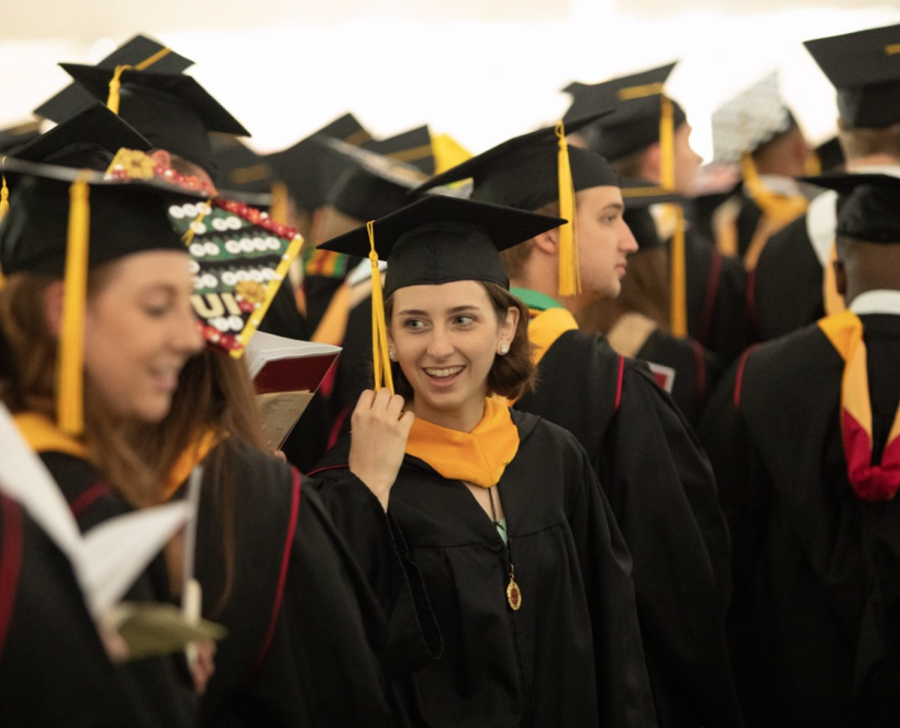 Graduates from the class of 2019 wait to flip their tassel. 2019 was the last time there was an in-person graduation ceremony at Bridgewater College. The 2021 graduation will be the next in-person ceremony.

Bridgewater, Va. – On March 19, President of Bridgewater College David Bushman announced changes to the graduation ceremony for the classes of 2020 and 2021.

Virginia set forth new capacity regulations that will allow the college to hold an in-person commencement ceremony. Students can bring up to two guests and all other family and friends are asked to watch the live stream of graduation off campus.

The new regulations also allow the school to have things like live music and the ringing of the Memorial Bell — which have been traditions done at previous graduation ceremonies.

There will be separate ceremonies for the different divisions with an estimated amount of around 80 students per ceremony.

“I’m thankful it’s back in person. My dad is flying all the way from Kuwait (on deployment) to see me graduate. When it was online for a little, I was sad because he already booked his flight. I am relieved it’s in-person as of now. Just wish more than two people could come,” said senior Jaide Dugger.

Another senior, Max Riley, also stated that he is disappointed that students are only allowed two visitors, but he was “extremely disappointed when it was supposed to be online as that had happened last year.” Max said he “knew a lot of seniors from the class of 2020 that were extremely put off by this because the online commencement ceremony was lackluster.”

As for the class of 2020, BC is hosting an in-person graduation ceremony on May 2, the day after the ceremony for the class of 2021. As of now, there will only be two group times, one at 9 a.m. and the other at noon. Graduates were asked to RSVP to get an estimate on the number of people attending.

Mackenzie Parcell, a graduate from the class of 2020, who is now pursuing her doctorate in Physical Therapy at Lynchburg University said it feels weird to go back and re-graduate.

“It’s nice that they at least tried to do something, but at the same time I am unsure if I will go. It’s awkward because we have been out of school for a year already and I have put a year into getting my doctorate,” said Parcell. “We just happened to graduate at the beginning of an awful time for the world. But I do appreciate the college putting on something, because I know a lot of people really wanted an in-person graduation.”