Three Second Half Goals Propel The Eagles Past The Gophers 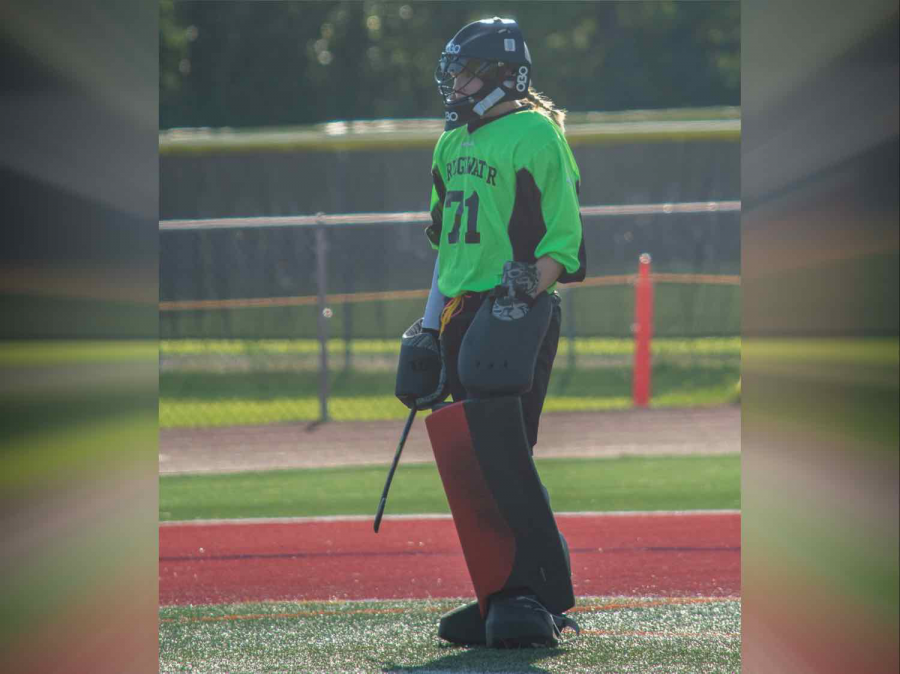 Senior goalkeeper Brooke Hamm against Johns Hopkins during the 2021 season home opener. Hamm made five saves in a shutout performance against Goucher College on Sept. 14

Bridgewater, Va. – Bridgewater College field hockey travelled to Maryland on Tuesday night to play the Gophers of Goucher College and returned to winning ways with a three goal shutout victory.

The first quarter play was a cagey affair, with neither side producing significant chances. Goucher saw their most promising sequence with back to back penalty corner attempts midway through the quarter. Both efforts were thwarted by a resolute BC defense.

The Eagles enjoyed a majority of possession during the period and a counter attack allowed first-year Emily Tyler a one-on-one opportunity, but the Gopher’s senior goalkeeper Devon Brashear saved the Eagle’s only shot in the quarter.

Play opened up for both teams in the second quarter. Senior Claire Ashley and junior Meghan Bailey recorded shots on goal during an early scramble in front of the goal, but both efforts were cleared by Brashear. The Gophers returned the favor minutes later as a frantic attack forced senior goalkeeper Brooke Hamm to the ground. A penalty corner resulted from the sequence, but proved harmless to BC.

The half ended with the sides trading chances. A shot by Tyler in the middle of the penalty circle dribbled just wide of the right post and out of bounds. Seconds later, Goucher forced a kick save from Hamm. First half action ended with the score knotted at zero.

Strong offense from BC in the latter stages of the third quarter put the Gophers on the back foot and gave the Eagles better chances on goal. Momentum was shifting in BC’s favor when a long shot from Ashley was blocked by a defender on the way to the goal. Just seconds later, a turnover by Goucher gave Tyler possession of the ball in the Eagle’s offensive half. An excellent individual effort and shot rewarded Tyler with the first goal of the game in minute 41 of play.

The goal only encouraged the BC attack further, winning a penalty corner with ten seconds left on the clock. First-year Erin Dameron put the ball into play to Tyler — who neatly tucked a shot into the goal with five seconds left to go for her second goal of the night.

BC’s offensive success continued into the final quarter. A mere 20 seconds into the period, Ashley found herself in possession of the ball right in front of the goal, where she calmly converted for the third and final goal of the night.

“I definitely think the first goal by Emily helped continue to swing the momentum to us. We talked a lot about increasing our intensity during halftime, and by being able to put into play what we talked about and proving that it works definitely helped with our overall momentum,” said Hamm.

Late game attacks from Goucher put BC into a defensive position. In minute 55, a Gopher shot resulted in a scramble at the mouth of the goal and a penalty corner for the home side. Hamm completed her shutout on the play, blocking the attempt with her glove hand for her number five and final save on the night.

The Eagles return to action on Sept. 17, when they travel to Southern Virginia. Conference play opens on the road against Sweet Briar on Sept.23.